“Excuse me, could I ask you a quick question? Oops you’re the COO, sorry I thought you were an ambassador in your yellow coat." - Kelli
“No problem, we wear yellow so you’ll ask us questions" - Frank, President & COO of Crystal Mountain

Getting There (and Back)

It is about a 2-hour drive from Seattle to Crystal Mountain. We did have concerns about our rental car (4x2 Ford F150) handling the snow. Then we realized the forecast said it was going to be raining at the base of the mountain, so we figured it would be just fine.

Jacob’s friend Jeff was a champ and drove the whole way. We left Seattle at 6:30 AM and there really was no traffic. Nothing like the bumper to bumper we experience when heading to ski in Colorado. The two of them chatted in the front seat, and after my first ever Taco Bell breakfast burrito, I slept most of the way and woke up in the parking lot. And it was raining.

We parked in Lot C. It was convenient that there was a ticket office in the lot, so that Jeff could pick up his ticket that he bought online. There were also porta potties but we opted to wait to go to the bathroom at the base. You can walk to the mountain from your lot or take a truck that pulls a trailer with benches.

On the way back, I experienced the ride that I missed on the way there. You drive on a winding road to / from the mountain. Part of the drive is in Mt. Baker-Snoqualmie National Forest, so there is a nice view and cute cabins. (If you’re looking to do multiple days at Crystal and not stay right at the mountain, it could be fun to stay in one of these picturesque cabins.) Then you get to the town of Enumclaw and it is all easy highway driving from there.

It was raining at the base of Chinook Express, but fortunately it quickly turned into snow while we were standing there. We realized the trail map at the top of the Rainier Express only had lifts and service roads, so we would recommend picking up a trail map. They do have the trail map on some of the safety bars on the lifts. Going up Rainier Express, people looked like they were having so much fun skiing the powder on Sunnyside, so we tried that for our first run. The snow was thick and heavy (Sierra cement!), but it was good steep skiing. We followed that up with the area between Pro Course and Green Valley - it was a ton of fun! Some woman lost her ski, so I picked it up to ski down to her, but I realized she was actually above me and it had fallen down the slope. They may be blues, but it's not easy terrain by any means. On the way down from one of our runs there we went into Middle Ferk's, which had a warning about rocks... we didn't really see any of those, just some ice.

We also took a couple runs off Green Valley Express - once on Blazing Elk/Snorting Elk, which was not that great due to being super chunky. We went up Forest Queen with the intent of taking Chair 6, which a friend recommended. Unfortunately the people going down below that looked like they were having a really bad time and traversing across instead of skiing downhill, so we opted out and took some blues down - they were pretty good for early season! This area seemed great for beginner/intermediate skiers, with some nice rollers.

There are three lodges at Crystal. The lodge at the main base area seems reasonably sized but actually has 5 levels – and the bathroom is on the lowest level, but you enter from the second. Get ready for some stairs in your ski boots. We mainly hung at the tables for a quick break, you can eat your own food here without a problem. They even gave us cups for water at Chinook Cafe. And we appreciated their commitment to composting.

Around lunchtime, we thought it would be nice to stop up at the lodge we saw at the top. We were wrong, it is only a restaurant and we had brought our lunch. There is a ski patrol station up there and some smelly bathrooms (nothing like that composting toilet smell). Trying to figure out if there was an option besides the base to eat lunch, I saw someone in a yellow Crystal mountain jacket. I figured he must be a mountain ambassador or safety squad, and would be able to give us a recommendation. Turns out, he was the President and COO of Crystal Mountain. Frank was very friendly and helpful, he gave us some great advice for where to eat lunch (he also showed us where Rainer should have been had it not been so foggy).

Frank told us there is a relatively new 12,000 sq ft lodge at the top of Forest Queen lift. We let him know we had brought our lunch and he said it shouldn’t be a problem. When we arrived at the lodge, we did see signs that said between 11-2 you could be asked to leave if you have outside food. But no one bothered us, so hey. The food there did look good (especially the Ramen) and with our Ikon passes we get a 10% discount, but Jeff had actually packed us a lunch. It was a new one for us but one we will be doing again – he cooked a frozen pizza and we ate it cold. It might sound unappetizing, but definitely hit the spot after skiing heavy powder during the morning. Just like Frank, we’d recommend going to Campbell Basin Lodge for lunch. You’ll also get to see some cartoons by Warren Miller - his “Northwest Skier” was spot on.

There is an outside patio/sun deck at the base with a restaurant called Fireside Bistro. It looked like it could be a lot of fun for après, but considering it was raining in the morning and snowing in the afternoon we opted to head back to Seattle. 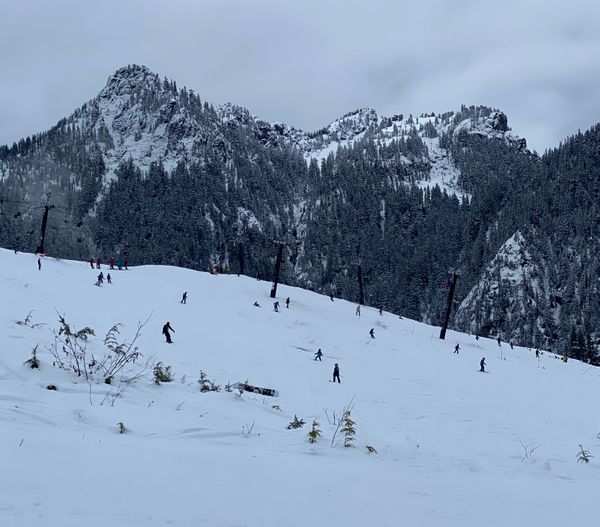 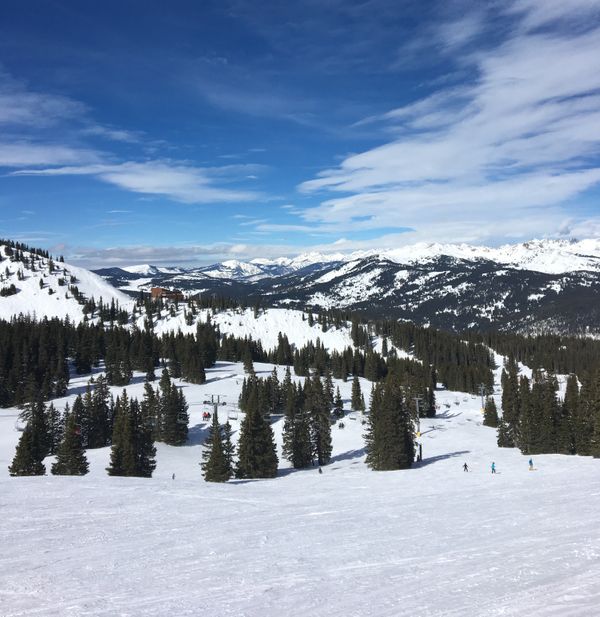 Since this is our first winter together, we are learning about each other’s planning styles and figuring out our combined approach.